by Arindam 5 years ago2 years ago

With this major version 2.0 release, brightness controller comes with separate R, G, B controller for all displays. It now supports “arbitrary number of displays” as well.

That’s not all, you can now save the the color profiles in file and load them as per your needs as well.

Compatible with only Python 2, brightness controller comes with PPA for installation in Ubuntu, Linux Mint and various derivatives.

To install brightness controller via PPA, run below commands from terminal and provide password when prompted.

If you want a simpler version of the controller – like if you just want a simple bar for brightness for four displays only, you can go ahead and give it a try of the older version 1.2.2. 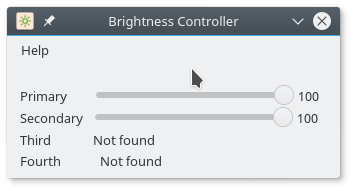 Here is how to install the same:

If you find any issues/bugs while using this app, report them @ GitHub

brightness
Creator of debugpoint.com. All time Linux user and open-source supporter. Connect with me via Telegram, Twitter, LinkedIn, or send us an email.
Subscribe